Font size: A A A back
Thursday, 11 March 2021
Posted by: Мариета Ханджиева 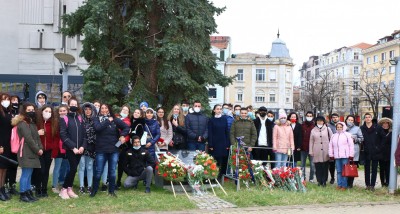 The day of the rescue of Bulgarian Jews from the Holocaust, which also honors the memory of the 11,343 Jews who died innocently from Vardar Macedonia, Aegean Thrace and Pirot, was marked with a solemn ritual organized by the Aleph Center for Jewish-Bulgarian Cooperation. Wreaths and flowers piled up the monument of gratitude in the center of Burgas, erected by descendants of the saved Jews in the city. Politicians, the chairman of the municipal council Sevdalina Turmanova, representatives of the Municipality and the District Administration, municipal councilors, many young people - pupils and students, teachers and principals of Burgas schools, descendants of saved Jews and dozens of citizens came to pay their respects to the rescuers.