BURGAS HONORS THE WORK OF THE APOSTLE 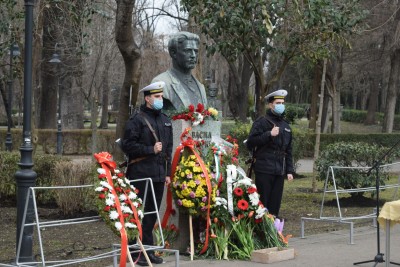 With a funeral prayer and offering wreaths and flowers, Burgas paid tribute to the work of Vasil Levski. The ceremony, organized by the Municipality of Burgas, was held in front of the monument to the revolutionary in the Sea Garden.

Dozens of patriotic citizens and officials, including Mayor Dimitar Nikolov, Deputy Mayor Diana Savateva, Municipal Council Chair Prof. Sevdalina Turmanova, representatives of state and local authorities, took part in the pilgrimage dedicated to the 148th anniversary of the death of the Apostle. .

“The vicissitudes of time are incapable of depersonalizing the greatness and genius of the Apostle. And the best way to honor his work is to be guided every day by his covenants and work with care for the good future of Bulgaria,", said Mayor Dimitar Nikolov on the occasion of the anniversary. Let us stand today in front of the monument to Levski with humility and gratitude for what he has done for Bulgaria to exist today.