UNTIL JANUARY 31, YOU HAVE THE OPPORTUNITY TO BECOME PART OF THE CINEMA CLASS AT THE SOFIA FILM FESTIVAL ON THE BEACH

Font size: A A A back
Friday, 28 January 2022
Posted by: Мариета Ханджиева 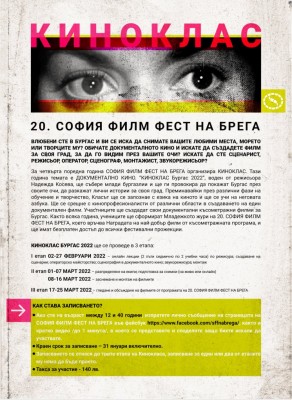 Do you love Burgas and want to photograph your favorite places, the sea or its creators? Do you like documentary cinema and want to make a film about your city? Do you dream of being a screenwriter, director, cameraman, set designer, editor, sound director?

Then hurry to sign up for "Cinema Class Burgas 2022" at the "Sofia Film Fest on the Beach". The deadline is January 31.

The fourth edition of the film class will take place from February 2 to March 25. The goal of the organizers is to provoke young talented citizens of Burgas to show Burgas through their eyes, to tell personal stories about their city, related to the sea and its cherished places.

The film class is open to people between the ages of 12 and 40. They must state their wish in a personal message on the Sofia Film Fest on the Facebook page (sffnabrega).

The participation fee is 140 BGN (for all stages). The registration refers to the entire duration of "CINEMA CLASS - Burgas 2022".