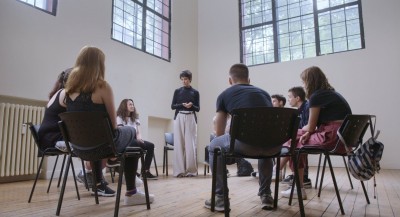 The film "Scenes from the life of an actress" by director Ivan Vladimirov was another interesting task on which the 32 participants in Cinema Class Burgas were working. The event is part of the "Sofia Film Fest on the Beach". History of cinema, screenwriting, cinematography and scenography are just some of the topics discussed in the Film Class with prominent native specialists so far. On February 25, from 7 to 9 pm, a lecture on editing will be held within the Burgas Film Class, led by the director Nadezhda Koseva, who is also the head of the Film Class.