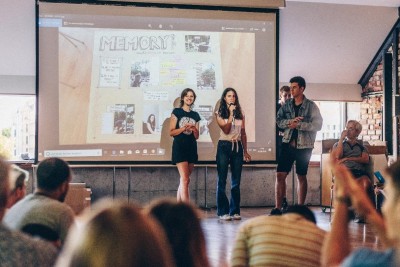 Following the Slovak Ministry of Education, Science and Sport, two other European institutions supported the International Student Literary Competition "He who saves one human life saves an entire universe", organized by the Alef Center. The Museum of the History of Polish Jews "Polin" in Warsaw - Poland and the "Anne Frank House" Museum in Amsterdam - the Netherlands said they wanted to promote the eighth edition of the "I will tell you about my savior" contest.

The Anne Frank House is one of the most visited museums in Amsterdam. Each year, it attracts more than 1.2 million visitors who come here to see the hideout where Anne and her parents hid from the Nazis during World War II for two years. The original of the diary of the 15-year-old girl, which has become one of the most popular books in the world, is also on display. Anne does not survive. After two years in hiding, she and her family were handed over to police and sent to a concentration camp. The girl, who dreamed of becoming a famous writer and journalist, does not return from the concentration camp.

The Polin Museum presents the 10-century history of the Jews in Poland and their contribution to the development of Polish culture, science and economy. It is located in the center of Warsaw, on the site of the largest Jewish ghetto in Europe, created by Nazi Germany during World War II. Polish Jews are among the most affected by the Holocaust, but they also have their saviors. The Yad Vashem Institute in Israel has awarded 6,620 Poles the title of "Righteous Among the Nations." Historians believe that the number of Poles helping Jews was significantly higher. The Polin Museum called on young people from Poland to look for brave and worthy people who hid Jews, provided them with humanitarian aid or even false documents, to tell about them and to show their knowledge, civic commitment and talent.

A month earlier, the Ministry of Education, Science and Sports of Slovakia and the Embassy of the Slovak Republic in Bulgaria announced the terms of the competition. Young authors from Slovakia are already submitting their works and taking part in the international literary competition.