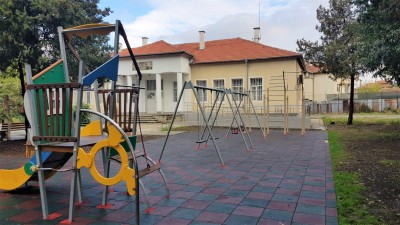 The Municipality of Burgas has improved the space in front of the National cultural centre "Vasil Levski 1937" in the “Gorno Ezerovo” neighbourhood. For the implementation of the project, it attracted funds from the Enterprise for Management of Environmental Protection Activities (EMEPA).

Thus, sports equipment for teenagers, swings, a climbing frame and seesaws for the little ones are installed on the softening floor in front of the Cultural centre. New benches have been installed.

"By the end of the year, we will implement similar projects in several other places in the constituent settlements and neighbourhoods of the city," said Mayor Dimitar Nikolov.