The adoption of homeless dogs became a good practice in Burgas

Font size: A A A back
Thursday, 23 February 2017
Posted by: Радостин Рачев 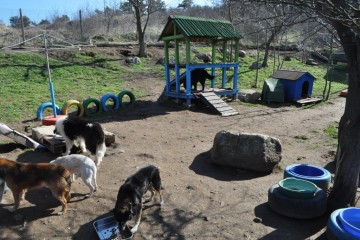 The efforts of Burgas Municipality for regulating of homeless dogs population,marked another successful year. For 2016 at the Dog Hospice were registrated 222 homeless dogs,as 160 of them were adopted.

Without the participation and the support of the Burgas citizens this would be impossible.

Different campaigns in Burgas helps on maintainning with the homeless dogs.According to statistics for the last four years,over 700 homeless dogs have been found new home.

Everyone,who is interested on the adoption,could find his four footed friend on the following page: http://opbk.burgas.bg/ or could visit the Dog's Hospice near Poda's area,open daily from 9.00 AM to 4.00 PM.

For the reducing of cat's population in Burgas also were marked successful results.In 2016,1871 cats were caught and castrated,the expectations for 2017 are increasing of the achieved amount.

Additional informartion for the Homeless Animals Campaigns in Burgas,as any questions on the subject,you will find on the Animal Hotline: 056/843 891