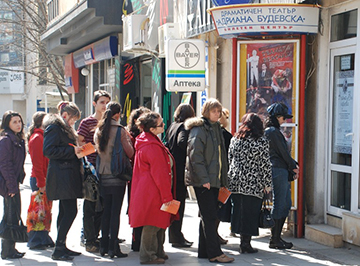 The best of “Sofia Film Fest” will be screened during its 7th sea edition in Burgas, which will be held March 12 – 20. For a seventh time citizens of Burgas will have the opportunity to watch valuable cinema and become part of screen magic. The selection is made by the festival’s art director Prof. Georgi Dyulgerov and includes some of the best films worldwide, winners of many international awards.

“Sofia Film Fest by the Sea” will be traditionally opened with old-time waltzes, played by the Brass Orchestra of Burgas on the square before the Municipality’s building.  Just s few minutes later the official beginning of the festival will be announced by Burgas Municipality’s Mayor Dimitar Nikolov.

This year’s Burgas edition of “Sofia Film Fest” starts with the new film of Wim Wenders’ “Palermo Shooting”, coproduction of UK and Germany. It tells the story of a world famous photographer, who leads wild life but is still missing something. During a photo session in Palermo he experiences a surrealistic journey through hell, when his life and art merge and he falls into a ditch. Then an angel comes to his rescue. It is the beauty Flavia, who helps the artist stand against his eternal enemy …death itself.

The two Bulgarian titles included in the Festival are: “The Only Story not Told by Hemingway” of Svetoslav Ovtcharov, that tells about the few hours spent in Bulgaria by Hemigwai on October 18th, 1922. The other Bulgarian film, that will close the festival, is Prof. Georgi Dyulgerov’s newest film “The Goat”. The screenplay of this fantastic story is based on Raditchkov’s novel, in which the goat is both a narrator and a character. He comes from Heaven with the mission not to allow people find a treasure hidden near ancient Thracian treasure.

This year all Jameson short films are included in the festival again.

The audience of the 7th edition of “Sofia Film Fest by the Sea” will have the opportunity to vote for their favourite film. Three “Silver Seagull” awards for motion films will be bestowed – an audience’s award, a jury’s award and a short film award. The new thing this year is that the winner in Jameson short films category will be selected after jury’s and audience’s vote.

Sale of tickets has already started and is of extraordinarily high interest. The tickets for the opening and closing screenings of the Festival have already finished. Additional screenings of the two films has been considered. The traditional information tables of “Sofia Film Fest by the Sea” are already set on Alexandrovska Street. For the festival’s brand appearance this year orange colour is chosen. A lot of Bulgarian and foreign guests are expected – they add some special charm and magic to the festival and make it one of the mostly expected and beloved events in Burgas.