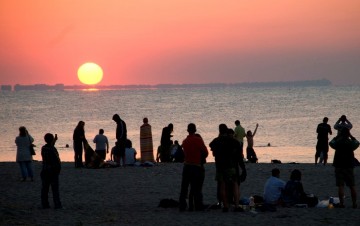 Shaking and unforgettable "July" awaits the citizens of Burgas and guests of the seaside this summer. The time and place of the most musical festival in the summer are known to everyone - June 30, Burgas, on the stage next to the Bridge.

The beach party is guaranteed with the presence of incredible musicians from the band "JEREMY?". Apart from their hit songs, the actor Philip Avramov and his blues band "Ginger" will take care of the cheerful and hippie mood, as this year will be joined by the famous Kalin Velyov.

The will be the first to hear the premiere of part of the songs in the upcoming third album of the beloved Burgas band "Silhouette". Another band with a strong female presence will be on the beach scene for the first time - this is a band called "SEVI" which, contrary to expectations, will immerse the people in the world of heavy rock with their original music.

And that's not all - the boys who have recently impressed Bulgarian music lovers - "SAINT ELECTRICS" - will perform our music on July the 1st. "The Freshmen" of the band "REWIND", apart from a cheerful mood, will present their newest songs on Burgas Beach. The local groups "RED LIGHT DESTRICT PROJECT" and "PHOENIX" will also contribute to the unforgettable reception in the morning hours of the first for the year.

The summer rock festival "July Morning" in the seaside town is organized for the 8th consecutive year by the Municipality of Burgas and the frontman of the rock band "Silhouette" - Mariana Dobreva.

Parents, get acquainted with the platform for online enrollment in kindergartens and nurseries before its real launch