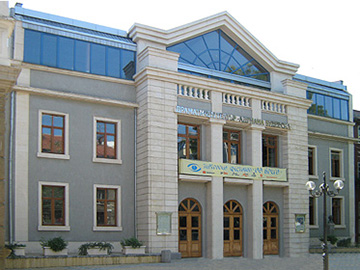 Drama Theater "Adriana Budevska" was named one of the most popular Bulgarian theater actresses. In its long history has given Bulgaria's priceless galaxy of names of major directors, actors and directors. Bourgas Theater is one of the brightest symbols of the city and is part of its magnetic character. Theoretically, the active season in Bourgas is from October to May, but in practice he continued throughout the year, in summer a large part of the national cultural life moves at resorts. Guest performances are played in the halls of the Military Club presidiary and cultural home Neftohimik.

From then until today the heroes of many Bulgarian and foreign classical works were lively for children under limelight theater.

Whole galaxy of talented actors with love and protect the prestigious repertoire mastered all systems puppets in shows, created by the best directors, and stage composers of Bulgaria in excellent working conditions, enviable audience and Professional recognition of colleagues and theaters.

With over 250 performances achieved over 10 000 performances played to nearly 3 000 000 viewers, overseas tours in Europe, Asia, Africa and America, many individual and collective awards from national surveys and international festivals, the theater has been established as a leading in the country.

Theater has a modern sound and lighting equipment and 200 seats.

In 2002 the director of the theater was awarded by the Minister of Culture and a diploma with plaket contribution in the development of Bulgarian theater.

In 2006 the theater became the first puppet theater, a medium established by the Minister of Culture Award for the highest financial performance and outstanding artistic achievements.

A great team of professionals - administrative, technical and creative, love and dedication to create the appearance of the English poetic puppet theater - BURGASS PUPPET THEATER.