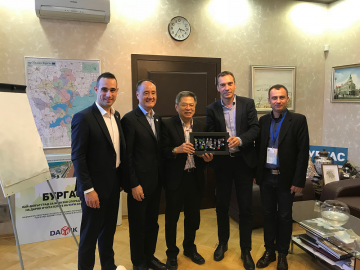 500 contestants from 35 countries on 5 continents participate in the elite World Cup, which takes place in the Mladost Hall from 27th to the 3rd of October.

The participants in the meeting discussed the opportunity to hold a Tai Chi Festival in Burgas, and also to include citizens to learn about this extremely popular sport in the world. "The idea is to link sport to culture and tourism, and Burgas is extremely suitable for this kind of event," said Anthony Go. According to him, the organization of such a festival can attract over 5,000 participants from all over the world, and through the forum to promote this sport among the general public.

The mayor of Bourgas expressed support for the idea and said that the participants could take advantage of the new Arena Arena as well as to organize seminars, demonstrations and outdoor events.

In the next four days, citizens of the Republic of Bulgaria will be able to watch the best Thai or Tai Chi players. Award ceremonies are every day at 12.00 and 19.00. Burgas hosts for the second time at the World Wrestling Championship in two years.

The World WSU federation has 152 organizations from all over the world, and the Bulgarian Federation is one of the most active among them and helps our sport to become Olympic discipline. Millions of viewers will watch the competition in Burgas through an official YouTube channel.

WASU was declared by the World Health Organization as a 21st century sport because of Tai Chi. This is a combination of healing gymnastics and martial arts. It is practiced by people of all ages and social backgrounds, while at the same time very beneficial to the condition of both the body and the mind.

Tai Chi is the most practiced style in WSU, or as Kung Fu is more popular in our country.